Originally Posted on the Quran and Bible Blog

“Narrated Abu Huraira: The Prophet (ﷺ) said, “A group of Israelites were lost. Nobody knows what they did. But I do not see them except that they were cursed and changed into rats, for if you put the milk of a she-camel in front of a rat, it will not drink it, but if the milk of a sheep is put in front of it, it will drink it.” I told this to Ka`b who asked me, “Did you hear it from the Prophet (ﷺ) ?” I said, “Yes.” Ka`b asked me the same question several times.; I said to Ka`b. “Do I read the Torah? (i.e. I tell you this from the Prophet.)”” *

“It was narrated that Thabit bin Yazid Al-Ansari said: “We were with the Prophet (ﷺ) and the people caught a mastigure. They grilled it and ate from it. Then I caught a mastigure so I grilled it and brought it to the Prophet (ﷺ). He took a palm stalk and started counting his finger with it, and said: ‘A nation from among the Children of Israel was turned into beasts of the earth, and I do not know if this is they.’ I said: ‘The people have grilled them and eaten them.’ He did not eat it and he did not forbid it.”” **

Explanation: These ahadith have generated confusion among some Muslims, and quite unsurprisingly, have been exploited by ignorant non-Muslims to mock Islam and the Prophet Muhammad (peace be upon him). As stated in the ahadith, the Prophet Muhammad (peace be upon him) had mentioned that some people from the Children of Israel had been transformed into rats and mastigures (the latter is a type of lizard belonging to the genus Uromastyx; see Figure 1 below). 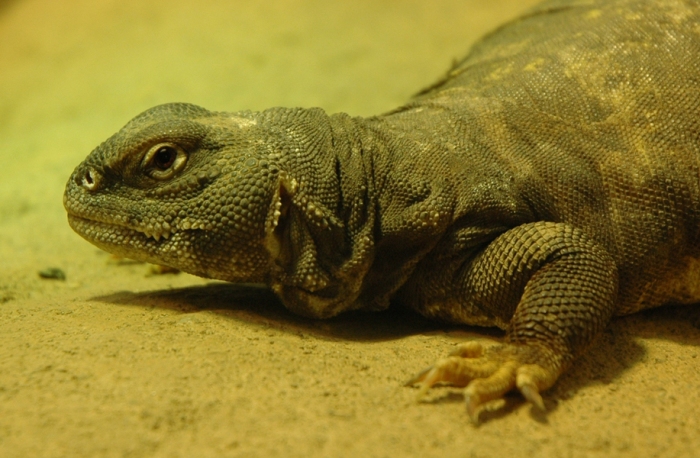 Other Muslim writers have already offered satisfactory explanations for these ahadith.[1] In short, the Prophet Muhammad (peace be upon him) was not speaking about this matter based on revelation. The uncertainty seen in phrases like “nobody knows what they did” and “I do not know if this is they” makes this clear. If the Prophet had received a revelation, he would not have been so uncertain. More likely, he had heard a story along those lines but was not sure about the details (the phrase “nobody knows what they did” implies that this was a common story circulating in Arabia).

In addition, it is mentioned in the Quran that some of the Sabbath-breakers among the Israelites had been transformed into apes.[2] Referring to those people, the Prophet (peace be upon him) stated that:

“[v]erily, Allah, the Exalted and Glorious, did not destroy a people or did not torment a people, and let their race grow. Apes and swine had been even before that (when the deniers of truth were tormented and suffered metamorphosis).”[3]

So, it appears that the Prophet was informed later via revelation that the people who had been transformed into animals had not survived and reproduced. Obviously, this would have applied to the people who had been turned into rats or lizards as well. Thus, it seems likely that the previous narrations about rats and lizards were based on the incomplete information the Prophet had received from other people. Once the revelation clarified the matter, there was no more uncertainty. This would explain why Prophet Muhammad (peace be upon him) would allow mastigures to be eaten by others but would still not eat their meat out of preference, whereas before, he would not eat them out of concern that they might be descendants of the original group of Israelites. Nevertheless, he let others eat the meat of mastigures (after telling them the story of transformation), which shows that despite his uncertainty, he did lean towards the view that there was no concern over consuming their meat. We can compare the following ahadith  to demonstrate this (emphasis ours):

In the hadith from Thabit bin Yazid Al-Ansari, the Prophet was hesitant on eating the meat due to a vague recollection that some Israelites had been transformed into animals. It should be noted that he also did not know what types of animals (“I do not know what kind of animals they were…”). However, in the hadith from Ibn Abbas, the Prophet did not eat the meat because he simply disliked it. This could also imply that he had indeed tasted the meat on a previous occasion and simply did not like the taste. Allah (Glorified and Exalted be He knows best) knows best.

Based on this analysis, we can conclude that there is no reason to cast doubt on these ahadith. Prophet Muhammad (peace be upon him) was a human being, and his knowledge on matters of the unseen was only as great or as limited as Allah (Glorified and Exalted be He) decreed. Nevertheless, there are some other objections that may be raised some non-Muslims which need to be discussed:

Ironically, this argument is itself fallacious and ignores the fact that the matter was clarified in other ahadith (as shown above), and the uncertainty surrounding the issue was lifted. As stated, the Prophet Muhammad (peace be upon him) was a human being living in 7th-century Arabia. Just because he was a Prophet of God does not mean he knew everything. He had observed a peculiar behavior among some rats and thought that perhaps they were the descendants of the lost group of Israelites. This observation was based on the limited information he had, which was then corrected through a later revelation. He never claimed to be knowledgeable about all matters, especially those that did not concern religion. In fact, he even stated as such:

The rats were not the descendants of the punished Israelites (see #3 below), since Allah (Glorified and Exalted be He) does not allow punished people to live and reproduce. Thus, the nations of prophets like Salih and Hud (peace be upon them) did not survive. They simply ceased to exist. The same thing happened to those Israelites who were transformed into apes, pigs, rats, or lizards.

This argument is silly and easily refutable. First of all, the Quran clearly states that this particular group of the Children of Israel was transformed into animals as a punishment for their sins. It does not say that all Israelites/Jews are apes/pigs/rats/lizards:

“And you had already known about those who transgressed among you concerning the sabbath, and We said to them, “Be apes, despised.” And We made it a deterrent punishment for those who were present and those who succeeded [them] and a lesson for those who fear Allah.”[7]

Thus, this particular punishment was sent as a “deterrent” to warn others of the potential consequences of disobeying Allah (Glorified and Exalted be He) on the matter of the Sabbath. It had nothing to do with “race” or “ethnicity”. In his commentary on these verses, Ibn Kathir noted how the punishment fit the crime:

“…Allah changed them from humans into monkeys, the animals having the form closest to humans. Their evil deeds and deceit appeared lawful on the surface, but they were in reality wicked. This is why their punishment was compatible with their crime.”[8]

This is also a silly argument and easily refutable. The previously mentioned hadith from Sahih Muslim explains this matter clearly (emphasis ours):

“[v]erily, Allah, the Exalted and Glorious, did not destroy a people or did not torment a people, and let their race grow. Apes and swine had been even before that (when the deniers of truth were tormented and suffered metamorphosis).”

So, in regard to the Sabbath-breakers, it has been clarified that the apes and swine that we see in our times are not their “descendants”. Thus, the same conclusion can be reached for those who were transformed into rats or lizards. They did not survive and reproduce. Ibn Kathir also clarified this matter in his commentary on Surah 2:65.[9] Any uncertainty that the Prophet Muhammad (peace be upon him) had expressed previously was clarified via revelation at a later time.

Finally, this argument is…you guessed it…also silly and easily refutable. Just because the laws of nature are not normally broken, it does not mean that Allah (Glorified and Exalted be He) cannot do so if He so chooses. This is a matter of the unseen. As Ibn Kathir explained it, quoting a narration from Ibn Abbas (may Allah be pleased with him):

“[Allah] does what He wills, with whom He wills and He changes the shape of whomever He wills.”[10]

And Allah (Glorified and Exalted be He) knows best!

Like Loading...
‹ Islam is going to destroy Christian West | Popular Orthodox Apologist admits
Updated Article – On Rabbits and Rumination: A Response to Christian Interpretations of Leviticus 11:5-6 ›