Home › Karl Marx › Interestingly Karl Marx was an appalling racist and his statues are untouched. Why?

Interestingly Karl Marx was an appalling racist and his statues are untouched. Why? 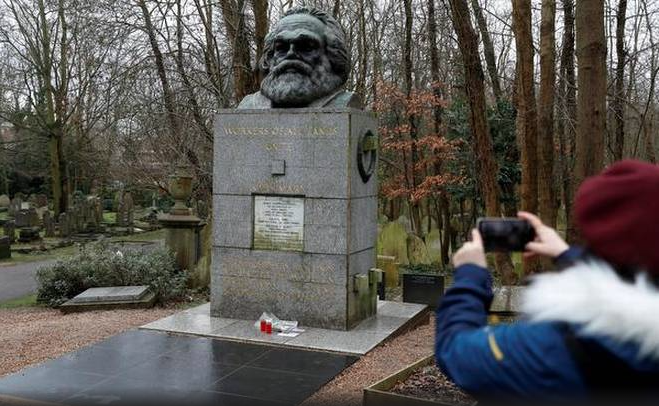 The German philosopher and economist was buried in Highgate Cemetery in London after his death in 1883.

For those who see Marx as their hero, there are a few historical tidbits they might find interesting. Nathaniel Weyl, himself a former communist, dug them up for his 1979 book, “Karl Marx: Racist.”

For example, Marx didn’t think much of Mexicans. When the United States annexed California after the Mexican War, Marx sarcastically asked, “Is it a misfortune that magnificent California was seized from the lazy Mexicans who did not know what to do with it?”

Engels shared Marx’s contempt for Mexicans, explaining: “In America we have witnessed the conquest of Mexico and have rejoiced at it. It is to the interest of its own development that Mexico will be placed under the tutelage of the United States.”

Marx had a racial vision that might be interesting to his modern-day black supporters. In a letter to Engels, in reference to his socialist political competitor Ferdinand Lassalle, Marx wrote:

It is now completely clear to me that he, as is proved by his cranial formation and his hair, descends from the Negroes who had joined Moses’ exodus from Egypt, assuming that his mother or grandmother on the paternal side had not interbred with a n—–. Now this union of Judaism and Germanism with a basic Negro substance must produce a peculiar product.

Engels shared Marx’s racial philosophy. In 1887, Paul Lafargue, who was Marx’s son-in-law, was a candidate for a council seat in a Paris district that contained a zoo. Engels claimed that Lafargue had “one-eighth or one-twelfth n—– blood.”

In a letter to Lafargue’s wife, Engels wrote, “Being in his quality as a n—–, a degree nearer to the rest of the animal kingdom than the rest of us, he is undoubtedly the most appropriate representative of that district.”

Marx was also an anti-Semite, as seen in his essay titled “On the Jewish Question,” which was published in 1844. Marx asked:

What is the worldly religion of the Jew? Huckstering. What is his worldly God? Money. … Money is the jealous god of Israel, in face of which no other god may exist. Money degrades all the gods of man—and turns them into commodities. … The bill of exchange is the real god of the Jew. His god is only an illusory bill of exchange. … The chimerical nationality of the Jew is the nationality of the merchant, of the man of money in general.