Home › Feminism › Islamic law: Wives are obligated to be available for intimacy with husbands

Islamic law: Wives are obligated to be available for intimacy with husbands

Another tweet for which I got a lot of unjustified complaints from social justice warriors and other confused folks.

Recently, Sh. Yasir Qadhi was viciously attacked because of his explanation of the hadith: “If a man calls his wife to his bed and she refuses [and does not come], and he spends the night angry with her, the angels will curse her until morning.”

He explained that, as far as Islamic law is concerned, women are obligated to be available for intimacy because that is the husband’s right. That does not mean the husband can harm his wife physically, but it does mean that if a wife refuses without a valid excuse, she is sinful. But this right of the husband is balanced by many rights of the wife. First and foremost, she is entitled to being supported financially (nafaqa) and if the husband fails in this and continues to demand his own marital rights, then he is sinful. So there is a clear parity here between husband and wife in Islamic law as far as this issue is concerned.

Well, the feminists did not like this explanation and proceeded to accuse Sh. Yasir of being a rape enabler.

This is the kind of unhinged histrionics that characterize the new state of gender discussions in the Muslim community. Feminists are pushing hard to get their categories, their frames, their normativities accepted wholesale by the community at large. Whoever disagrees is going to get accused of being Harvey Weinstein, Donald Trump, a rapist, a rape enabler, a misogynist, etc.

We cannot bow to this pressure. There is nothing wrong or out of place — Islamically, rationally, or otherwise — in explaining the basic tenets of fiqh and Islamic ethics.

In my tweet, I simply pointed out the feminist hypocrisy of bemoaning one kind of obligation but completely ignoring another obligation that is equally taxing and equally pressing just because it involves men. Isn’t this a clear double standard?

In being required to provide nafaqa for their families, the vast majority of men have to do things that they ultimately would rather not do. They have to go to work. They have to subject themselves to employers who ultimately don’t care one way or another about their well-being. They have to be at the mercy of the often cruel and unforgiving world of wage labor. This is no small obligation that men have vis-a-vis their wives.

Plenty can be said about this, but the point is, the feminist outcry completely misses this aspect of the issue in its haste to present a victimized image of women, and Muslim women in particular. This is their project to portray Islamic law as misogynist and therefore immoral and therefore rejected. We have to be willing to push back. 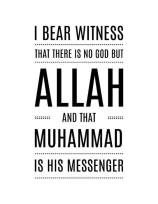