Most Christians (not all) believe that Jesus is God and worship him as part of the Trinity. But what did the New Testament writers say about worshipping Jesus. Did they view him as God, as someone whom we should worship?

James Dunn is a leading Christian New Testament scholar who personally believes in the Trinity. His groundbreaking work fearlessly faces the historical questions about the Bible and 1st century Christianity. 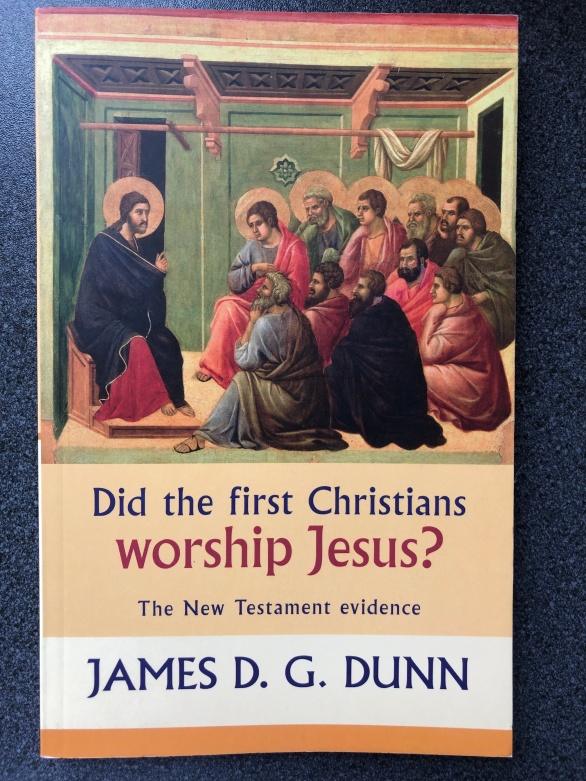 His 151 page survey of the historical and textual evidence comes to the following conclusion in the final chapter: “The answer”. On page 147 he describes the danger in Christian worship,

“if it is defined too simply as worship of Jesus. For, if what has emerged in this inquiry is taken seriously, it soon becomes evident that Christian worship can deteriorate into what may be called Jesus-olatry. That is, not simply the worship of Jesus, but worship that falls short of the worship due to the one God and Father of our Lord Jesus Christ. I use the term ‘Jesus-olary’ as in an important sense parallel or even close to ‘idolatry’. As Israel’s prophets pointed out on several occasions, the calamity of idolatry is that the idol is in effect taken to be the god to be worshiped. So the idol substitutes for the god, takes the place of God.  The worship due to God is absorbed by the idol. The danger of Jesus-olatry is similar: that Jesus has been substituted for God, has taken the place of the one creator God; Jesus is absorbing the worship due to God alone.”

On the penultimate page he concludes,

“No, by and large the first Christians did not worship Jesus as such.”

“Jesus cannot fail to feature in Christian worship, in their hymns of praise, their petitions to God. But such worship is always, should always be offered to the glory of God the Father.”

If Dunn’s analysis is correct, and I believe it is, then most Christians today are guilty of the egregious sin of idolatry or Jesus-olatry. Islam, of course, came as a reforming movement to call those Christians who have gone astray back on the path of pure monotheism. The first six verses of the Qur’an are pertinent:

In the name of Allah, the Most Gracious, the Most Merciful:

All Praise is due to Allah, Lord of the Universe

The Most Gracious, the Most Merciful.

Owner of the Day of Judgement.

You alone do we worship, and You alone we turn to for help

Guide us to the straight path;

The path of those on whom You have bestowed your grace, not (the way) of those who have earned Your anger, nor of those who went astray [ie the Christians].